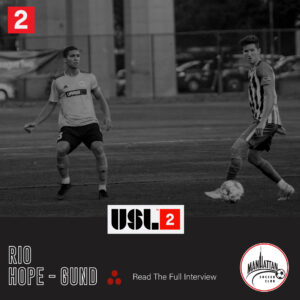 TAMPA, Fla. –  2021 MLS SuperDraft first-round selection Rio Hope-Gund has recently signed his first professional contract with Major League Soccer’s Orlando City SC after spending a single season with USL League Two’s Manhattan SC in 2019. Hope-Gund was Orlando’s second pick in the first-round (No. 19 overall) in the January draft and has been given a one-year contract with club option years for 2022, 2023 and 2024.

The 21 year-old native of New York City was a standout in his time with League Two playing with Manhattan SC in 2019, starting every game for the club. Hope-Gund was also an essential piece of Georgetown’s defense in his collegiate career as he started and appeared in 20 games for the Hoyas in 2019 and helped the team post 13 shutouts for the season. That same year, he also helped lead the Hoyas to a 2019 NCAA National Championship title.